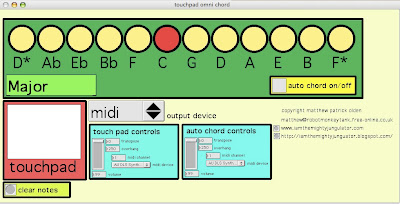 I got my brother an omnichord for his birthday last year. Ive been writting a midi program for it. Its a complete midi nightmare. You cant turn off it sending drums, and the strip where you play notes doesnt send out note information...so like i say ive been writtaing a program which will let you easily manipulate its midi data....
the main problem is that when using it with logic it seems impossible to turn off the omnichord going in on midi,ive tried setting the midi channel in logic to not accept input on certian channels,but it just wont let me...if anyone knows logic well enough to tell me where im going wrong...

anyway....i'll put that one up when im finished,in the mean time ive made a virtual one.

the way it works is that each row of keys produces a chord, and when the keypad is stroked left to right it plays theses notes (over 4 octives). Like an omni chord you can play 72 different chords

with caps lock on

sorry if there isnt a major minor scale, dont realy know the terminolgy.....

it sends out through midi (use IAC for sending to summat like logic, or use the computers on board synth), or you can test it using sinewaves....
the options to send it to a vst synth or a sample arent working yet....